Sidsel has an extensive list of solo performances behind her. She has repeatedly played with The Norwegian Radio Orchestra KORK, Trondheim Symphony Orchestra, The Trondheim Soloists, The Norwegian Chamber Orchestra and Murmansk Philharmonic Orchestra to name but a few, and these performances include amongst others harp concertos by Mozart, Ravel, Debussy, Haendel, Gliere, Thommesen, Ginastera, Grandjany and Hotvedt.

In 2016 Sidsel performed the Ginastera harp concerto with KORK for their 75 years anniversary concert conducted by chief conductor Miguel Harth-Bedoya. The composer Ginastera worked closely with harpist Nicanor Zabaleta, who performed the premiere harp concerto in 1965. After the premiere the concerto was revised and in fact recorded by Zabaleta. This is a recording regrettably very few people are aware of existing. The harp score published by Boosey & Hawkes does not correspond with the revised edition. During the rehearsal period Sidsel therefore decided to research the original full score, correspondence and other material existing in both London and Basel. Sidsel has chosen to perform a version based on her studies and Zabaleta’s recording.  A CD recording of the Ginastera concerto is recorded by Sidsel, KORK and Miguel Harth-Bedoya and is due to be published by LAWO in the time of 2019. So for now it’s just time to sit back and look forward to it.

A selection of photos and video clips from the concert may be found here.

“Norwegian harpist Sidsel Walstad is technically and musically a force of nature. She does deliver a memorable performance that will surely become a standard against which to judge future attempts at this musical minefield. Extraordinary *****”.

“Soloist Sidsel Walstad is superb throughout”

“Walstad’s playing is eloquently dreamy and distinctively ripe in tone.
Her performance is scintillating”.

“Walstad whispers, wails, growls, hisses, and intones gloriously, leaving us eating out of her hands”.

“Sidsel Walstad makes light work of the Concerto’s technical rigours in this wonderfully spirited and sensitive interpretation, well-supported throughout by the Norwegian Radio Orchestra».

”In this attractive recording, Sidsel Walstad turns in a colorful, sharply articulated performance, with poetry and virtuosity to spare. Her coordination with the Norwegian Radio Orchestra is deft, and her cadenza in the finale is stunning”. 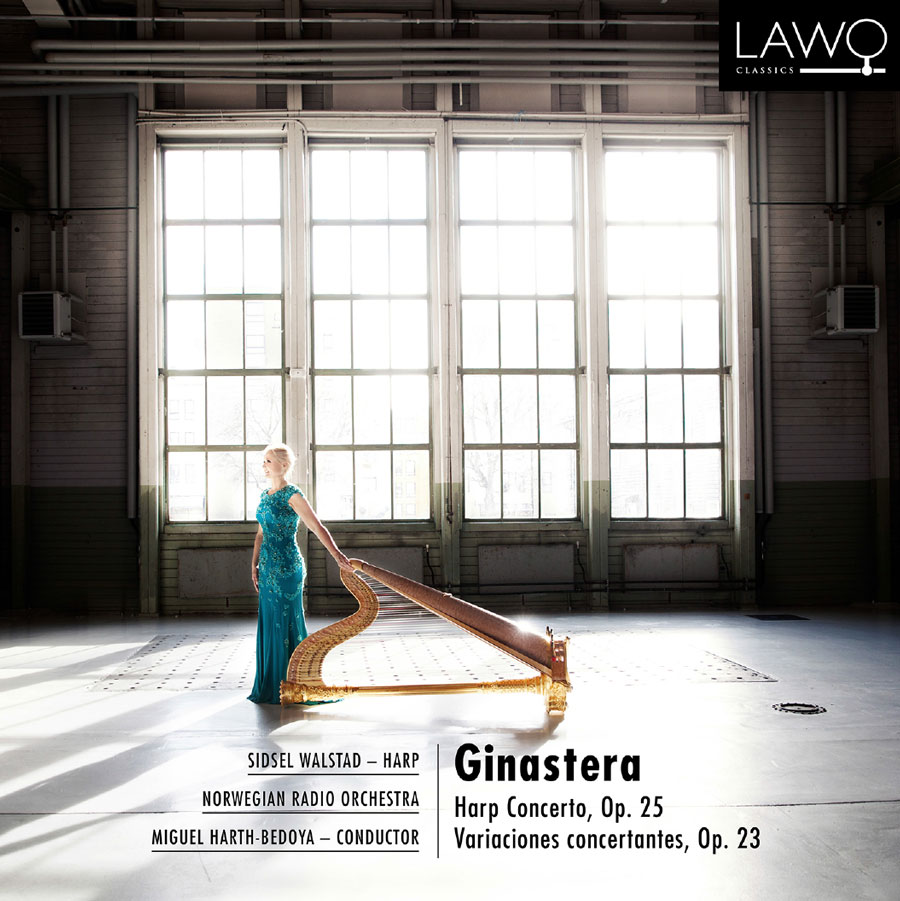 GINASTERA FOR HARP AND ORCHESTRA

There are few composers who can get a concert hall rocking and dancing feet moving better than Alberto Ginastera.
Performing his music requires a unique combination of classical virtuosity and sense of rhythm. This is the first Norwegian recording of Ginastera’s Harp Concerto, Op. 25 and “Variciones concertantes”, Op. 23, performed here by the Norwegian Radio Orchestra (KORK) and its solo harpist Sidsel Walstad.

The harp concerto was commissioned in 1956 by harpist Edna Phillips but not premiered until 1965 in a performance by the Spanish harpist Nicanor Zabaleta, who had collaborated closely with the composer. Despite its tremendous demands on the soloist, the concerto has become a standard work (one of very few) for harp and orchestra. Walstad bases her recording in large measure on the revised version Zabaleta recorded in 1968, a version that is closer to the composer’s intentions than earlier recordings.

Here we encounter the harp as a rhythmic motor that accentuates the percussive quality of the music, but also brings out parts with intense and mystical beauty.

We also get to hear Ginastera’s “Variaciones concertantes” from 1953, an irresistable combination of orchestral timbres and a demanding soloist performance. Solo parts are given to all the instruments in the orchestra, before the gauchos ride across the Pampas in the closing rondo.

Sidsel Walstad describes playing the harp concerto as “climbing a mountain”. Whether it feels like that for most harpists, Walstad has the best qualifications for tackling Ginastera’s demanding rhythms and complexity. As solo harpist in the Norwegian Radio Orchestra she is exposed to a wide variety of genres, compositions and arrangements that take the harp far from classical music’s beaten path.

Like Ginastera, Peruvian chief conductor Miguel Harth-Bedoya’s heart pounds for South American music and culture. He is one of the conductors who has contributed most to spreading music from his own continent out into the world, not least through concerts and a number of releases with KORK in recent years.